Hubby got me the neatest Christmas present this year. He took one of my favorite pictures of Jedi and turned it into a necklace. He even had Jedi's registered name engraved on the back. This is the original picture: 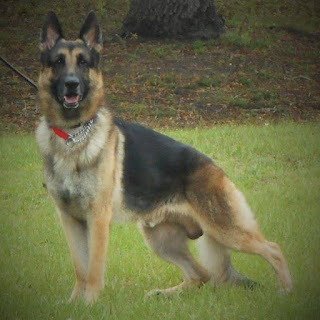 Which became this necklace:

I wore it to the Westminster Dog Show this year so that Jedi could join me in spirit. (He'll never get there with my sucky handling skills!) 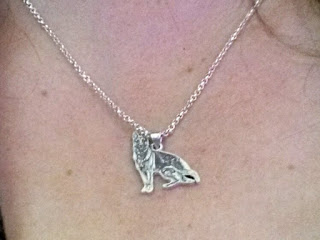 For reference, the necklace is about the size of a quarter. So how cool is this? Do you want one too? Go to My Pets for more details. But first, hop around below and see what others are sharing. It's Wordless Wednesday! -- K

Jedi is the most vocal dog I have ever known -- and that includes my mother's husky! Jedi whines, groans, grunts, sighs, barks, yips, yowls, woofs and howls all the time -- for whatever reason. The more excited he gets, the louder he becomes. This includes car rides, approaching his favorite parks, going to any pet store, using the self-wash at Pet Supplies Plus and the first 20 minutes inside a hotel room. (I always pay the pet deposit up front -- there is no sneaking Jedi in!) And the more you try to quiet him down, the more excited (and therefore vocal) he becomes.

My friends think it's hilarious. Some even encourage it! Others just laugh and take pictures. In the past year I've been tagged in two dozen photos like this: 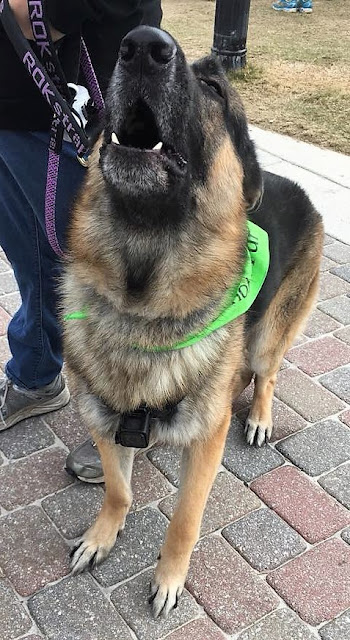 In this picture Jedi is just singing his lungs out! If you look closely, you'll see he's wearing a GoPro. Once I figure that out I'll actually record him so you can enjoy the voice of Jedi as well.

Annoying aside, Jedi's joie de vivre is undeniable. I hope it made you smile. Today is Awww...Monday, where a group of bloggers come together to brighten the start of your work week. Click around below and see what others are sharing. A big thank you to Sandee for putting this together each week. Happy Monday! -- K

The 142nd Westminster Kennel Club Dog Show was earlier this week -- and I was there. Yep, I can cross that one off the bucket list! I was in New York City Saturday through Wednesday and I don't think I got more than twelve hours sleep total. I'm still groggy, but I wanted to share with you all while it's still fresh in my mind.

New York was overwhelming. We were there 5 days/4 nights and barely scratched the surface. We saw Wicked on Broadway, caught a comedy show in a dive club, ate dim sum in Chinatown, rode the subway, had a rude cab driver (and several really nice ones), visited the 9/11 Memorial, got a hot dog from a street vendor in Central Park, ate lots of real NY bagels and so much more. Our hotel was in Times Square and it's true that the city never sleeps.

Back to the dog show: The individual breed shows are held at Piers 92 and 94 during the day, with half on Monday and the other half on Tuesday. I expected a lot more from the day shows at the Piers – the AKC National Championship in Orlando is bigger (go figure). There were only a dozen vendors or so, and most of them were way out of my price range. Because of this, I didn't spend nearly as much there as I had budgeted. Good thing too. Food all over NY was expensive, and I spent more than I had expected on cab rides. (I didn't brave the subway until day 3.)

All the dogs were gorgeous. We got there early and had ringside seats for the GSDs. This was a benched show, so all the dogs had to be on display the entire day. This allowed us to schmooze with the dogs and owners/handlers afterwards. Awesome! I think I met my next puppy’s daddy. Seriously! Don't tell Jedi.

The night shows at Madison Square Garden were all that I had imagined. It's a huge venue and it was full of dog lovers. There were also a lot of casual spectators, which I found surprising. The announcer made several comments about these being intentionally bred dogs from reputable breeders, and urged people not to buy dogs from pet stores or puppy mills. Touché!

We also visited the Pennsylvania Hotel across the street from MSG and checked out the basement where dogs were being groomed, pottied and exercised. This is the official hotel of the Westminster Dog Show and every year it becomes dog central.

BTW, there is nothing low fat in NYC. I ate like crazy (hot dogs, bagels, pizza, cheese cake and Rueben sandwiches top the list) but only gained half a pound. My Fitbit said I walked 31.37 miles in 5 days, so I think that helped. It was wet on Sunday and colder on Tuesday, but the weather was never unbearable. I had friends go to the show a couple years ago and it was 8 degrees. EIGHT! By comparison, our low was 38 and the high was 52. Cold by Florida standards, but all in all not bad.

Next time I go to NYC (and yes, there will be a next time!) I will make sure to see the Statue of Liberty, the Natural History Museum and the Bronx Zoo. For now, I'm still trying to process it all. There are hundreds of NYC pictures between me and my three traveling companions. Here are a few that I think you might find most relevant. Enjoy! -- K

Email ThisBlogThis!Share to TwitterShare to FacebookShare to Pinterest
Labels: Westminster

Jedi and I did Chariots of Fur again this year. In years past we've only done the mile. This year we did the whole 5K. In the cold. In the sand. My goal was to walk it in an hour. I was over by 19 seconds -- not bad! 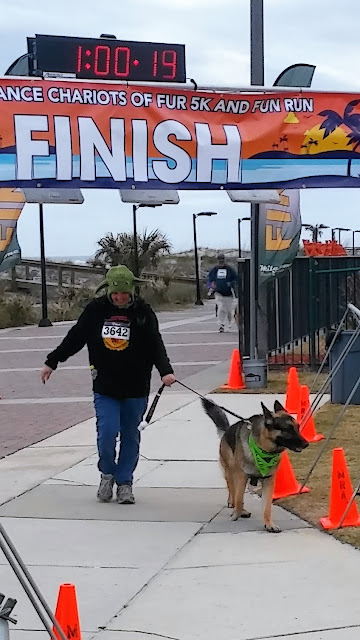 I'd tell you all about it, but it's Wordless Wednesday! Hop around below and see what others are sharing today. -- K

Email ThisBlogThis!Share to TwitterShare to FacebookShare to Pinterest
Labels: Things to Do, Wordless Wednesday 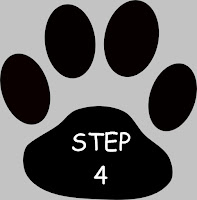 The next big thing we have to do for the show is create a premium. This is the official announcement of a club's event. It contains the show’s entry form plus a slew of other information. Essentially, a premium is the contract between a club and prospective exhibitors.

As Show Secretary, the premium is my job. Unfortunately, a template wasn't handed down. Grr. I've been sketching out our premium for weeks now. Hopefully, I'll develop a decent template that can be passed on to the next Show Secretary -- saving her a lot of work. Like everything else, this is more complicated than I'd like. There's a lot more to it than I thought. The AKC requires a premium to include:
Whew. There are even more requirements for all-breed shows and/or obedience trials.

Since exhibitors choose which shows to enter based on the premium, most clubs also include:
Currently, our premium is a 14-page booklet. I know! I have a list of over 200 people to send it to. I'll be thrilled if 25% enter the show.

My contact list is proving to be another problem. It's ancient and was handed to me as a pdf, not an editable Word document. I spent 20 hours putting everything into an Excel spreadsheet. I spent another 10 hours combing through old emails, various GSD club sites and past show catalogs gathering more contact data. To date, I have email addresses for 150+ people, and only mailing addresses for another 60. Soon I'm going to have to get my premium to as many of them as possible. This is what I've done:
The plan: two weeks before we release the premium, I'm sending a mass email to everybody on the list. The email states that the club is working off an old mailing list and they're on it. Recipents will be asked to respond if they wish to be removed from the list. (We understand that things change and some people may not be on the GSD show circuit any longer.)

At the same time l'm sending a postcard to the USPS address people. The postcard also states that the club is working off an old mailing list and they're on it. I'm asking recipients to send an email to the gmail address if they wish to have a premium emailed to them.

All recipients are told that I will send the premium out shortly. Hopefully, they'll be happy to get it.

Ideally, this strategy will keep the cost of postage down. I did the math. Printing, envelopes and postage for 225 14-page premium booklets would be about $530. Thank goodness for email! I don't think our club could afford that expense up front -- if at all. However, the AKC does insist that we send them four copies of our premium when we release it. (Why they can't get it via email and print all the copies they want is beyond me!)

As you can see, I've been busy! If you'd like to see the premium you can use the "contact me" form to the right and I'll send you one. Send an email to GSDCNFLShowSec at gmail.com and I'll add you to the list. We're shooting for a March 1 release date.

As tedious as the premium seems, it's nothing compared to what's next -- the catalog!
Posted by It's Kelley! at 11:39 AM No comments: