My work asked everybody decorate their office doors for Halloween. I wanted something animal related (naturally) and found this Zombie Dog sign at Walmart. Trooper was sleeping in my office while I hung everything. I forgot he was even there. However, he popped up in the window as I was taking a picture -- and my decorating got much more interesting! 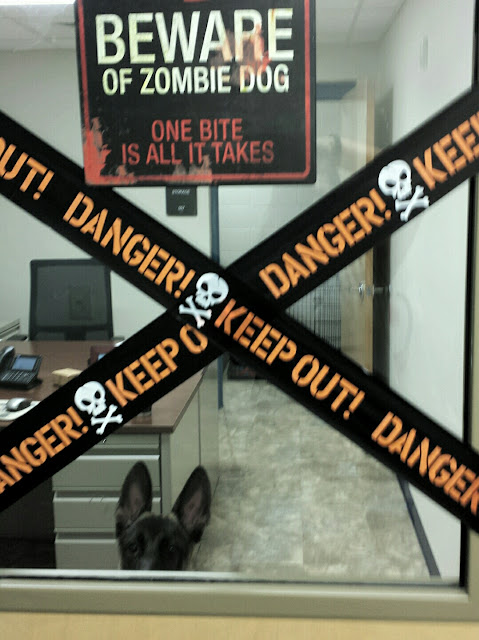 It was fun to see what everybody came up with. Remember, I'm in a department full of crime scene tape, evidence bags and cop humor. To protect the reputations of my coworkers, I'm NOT sharing most of their creations.


One of the dispatchers is also a Star Wars nerd. He brought in his life-sized R2-D2. This thing moves, has lights and sounds, and my friend can control it from his phone -- I'm so jealous! I thought it would be amusing to get a picture of Trooper next to R2. Trooper sat up straight and posed nicely for half dozen pictures. He couldn't have cared less about the droid. However, he was very suspicious of a nearby pumpkin. What a goofy dog. 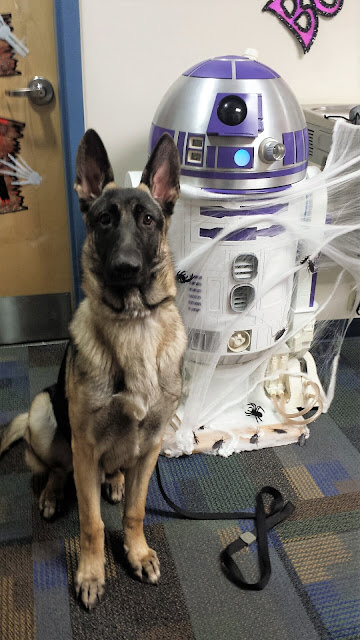 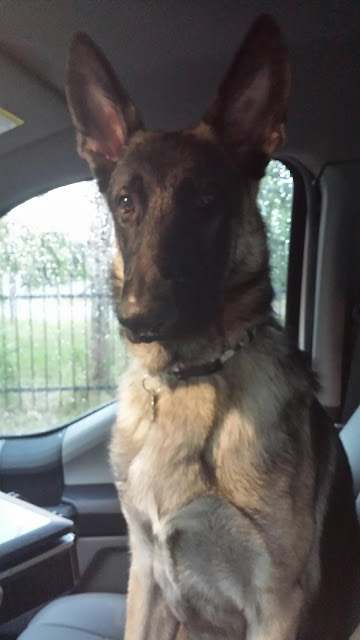 It's Fall. The weather is changing in typical Florida fashion. Last week we were in the high 80s; this weekend barely reached the low 60s. It's a wonder we don't all die of hypothermia.

Rain comes and goes at random intervals -- invariably when I have something to do outside. It makes me want to stay in my pajamas, drink coffee and watch old movies on TCM. Even the sun is sleeping in later. Despite my PJ fantasies, I'm up by 5:30 every morning. ugh. Even on my days off the dogs feel that we need to be up with the chickens. (FYI: I don't have chickens.)

Trooper comes to work with me most mornings. (One of the few perks of my job). We'll spend the first hour of the day doing paperwork, answering emails and returning phone calls. Then we patrol the City until 9-10 AM (earlier if it's hot outside). Trooper usually spends the next few hours at my kennel before finishing the day off in my office doing more boring administrative stuff. On slow days we'll have lunch in one of the City's many parks. You'd think that most dogs would think this deal was awesome. Not my guy.

Apparently Trooper thinks morning patrol is boring. He also gave me the stink eye when I asked him to smile for the camera. What a turd. However, it made for a funny photo. 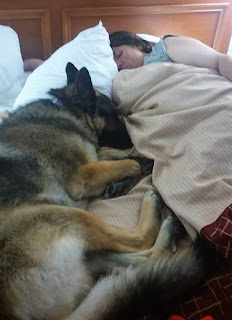 Every year the German Shepherd Dog Club of America hosts a week of dog shows and events. The Nationals, as they're called, showcase everything German Shepherds can do: conformation, obedience, rally, tracking, herding, dock diving, lure coursing and more. Amongst the competitions are educational programs, awards, dinners, vendors, contests, socializing and networking. The GSDCA 2018 National shows just ended. I've been following it on Facebook all week. Not surprisingly,

Wednesday was a slow day at work. I was patrolling the beach, deep in my own thoughts and scrolling through Facebook. The pictures from the shows are amazing. I thought "Gee, I'd like to go to Nationals someday." Then a little voice in my head reminded me that I'm not getting any younger. Jerk.

That same voice told me to "piss or get off the pot" two years ago. (Sorry, the voices in my head have potty mouths.) Long story short: I listened to the voices and ended up at the Westminster Kennel Club dog show last February! It was a trip of a lifetime. GSD people tell me that Westminster pales in comparison to Nationals. It's all German Shepherds, all week long. So . . . I'm seriously looking into going to Nationals.

The location of Nationals moves around the country (though they've been in Missouri a lot lately). The 2019 GSDCA National shows will be in Loveland, Colorado. They'll be at the Larimer County Fairgrounds and Events Complex ("The Ranch") October 5 through 12. I've contacted RK, Blondie and Red to see if they're up for another adventure. Going with friends divides the cost and multiplies the fun.

Between you and me, I'm terrified. (I'm telling you this because the girls don't read my blog!) There's no tour package like we had for Westminster. We're going to have to negotiate flights, hotel costs and a rental car all on our own. There are so many variables! It's harder for me to budget when we're doing this piecemeal. BUT . . . it's not impossible. I'm writing this down and sharing with my blogging buddies because it's harder to back out this way. (Yes, you're being used. 😁)

Anyway, enough of the soul bearing, I need to wash the dogs. They've got a big weekend coming up and need to look pretty. Hopefully I'll have good news for you on Monday. Later, -- K 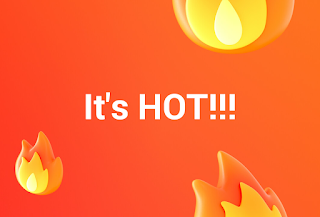 I told you the other day that lately I've been a lump when it comes to the dogs. It's true, but I still try to do something to keep them entertained else they drive me nuts.

It's H-O-T in Florida. It's late October and we're still dealing with highs in the mid-80s. However, the dogs don't care that I'm exhausted and hate getting sweaty. They're tired of sitting around doing nothing. A bored dog is not a good thing. I try to find fun and creative things to do. Some of our favorite things are: 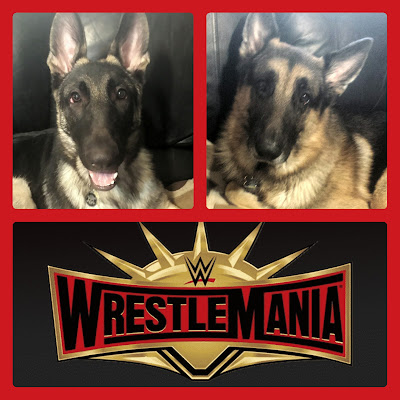 The boys entertain themselves with regular roughhousing. It's heartwarming to see them get along so well. It can also be painful. For whatever reason, the dogs feel it necessary to wrestle where I can see them: the living room, my office, on my bed, wherever. They crash into furniture and stomp on anything/anyone in their path. If I move to another room, the commotion moves with me.

How about you? What fun things do you guys do to keep the pups entertained? Please share! We're always looking for something new. -- K

Email ThisBlogThis!Share to TwitterShare to FacebookShare to Pinterest
Labels: Things to Do

Wow, it's been over a month since my last post. Things have been busy with me and the dogs. Nothing overly exciting, but still busy. Let's see if I can catch you up.

Trooper's first shows were last month. Despite all my preparation, we had a last-minute change of plans. He and I had been practicing our ringcraft a couple times a week. I forgot that I'm 50 and don't move like I used to. During handling class I twisted my right knee. It was swollen hurt like crazy for weeks. I ended up having someone else take Trooper into the ring. Trooper was the only one in his class, so he walked away with a blue ribbon each day. That being said, he didn't seem to enjoy himself. I think he was stressed. He moved nicely, but shied away from the physical exam. Grrr. Both judges said really nice things about my dog. A professional handler friend of my breeder really liked Trooper too. The consensus is: he's promising, but needs to get over the "strangers touching him" thing.

That same weekend Jedi competed in three Fast CAT trials. He ran the 100-yard dash between 10.01 and 10.66 seconds each time. That's pretty damn fast! By my calculations he earned the 150 points required for his BCAT title. However, the AKC is really slow about posting results, so I don't have official confirmation yet.

Two days after the shows we had Jedi neutered. His OFA test last year revealed a wonky elbow. Dammit. I decided against breeding him, so keeping the hormones and urges tied to them would be cruel. Also, he's six now. Middle age brings prostate complications. Neutering removes these problems. And on a purely selfish level, I didn't want two intact males in my small house. I figured neutering Jedi before Trooper reaches sexual maturity would help keep peace in my home. The vet did a wonderful job. The internal stitches were dissolvable, and instead of external stitches, surgical glue was used. Jedi never appeared uncomfortable or itchy, so we didn't have to use the cone. Everything healed up beautifully.

The following week Trooper became an AKC S.T.A.R. Puppy. Yay! A certificate and medal came in the mail over the weekend. I tried to get a good picture, but he wouldn't sit still. This is as good as you're going to get!

So what's next? This Sunday I'm taking both boys to Barn Hunt trials in DeLand. Jedi is still working towards his open title. He hasn't been on rats since April. I hope he remembers. I signed Trooper up for the Instinct test (since we're going to be there anyway). We'll see if Trooper's got it. We haven't been able to train anywhere, so I may just be eating the $20.

Saturday there's a German Shepherd only match just outside Ocala. The White German Shepherd Dog Club of America is holding their National Specialty shows this weekend. They are offering a match (kind of a practice confirmation show) just for "colored" German shepherds like us. Fortunately, they're only taking entries day of. I'm waffling back and forth over entering Trooper. He's still weird about strangers, and I haven't been working on it like I should. He's in his second fear period and I don't want to traumatize him. At the same time, the longer we wait the further behind we're going to be in his training. So . . . more decisions.

Mostly I'm frustrated. And I'm tired. All. The. Freakin. Time. This is making everything more difficult.

And to add insult to injury, my ancient cell phone has become unreliable. Every time something updates, something else screws up. I may or may not be able to blog, post to Facebook, take/view pictures or text at any given time. The picture quality stinks, with more photos blurry than not. BUT -- and this is a big but -- my Galaxy S4 is paid for. (Yes, I realize that the S9s are out. I said ancient!) Honestly, I don't want to spend that kind of money, especially during dog sports season!


Want to hear something sad? I've started and deleted a half-dozen post in the last month. I felt they were just too negative -- even by my glass-is-half-empty standards. Truth is, I have a hard time sharing when I'm feeling surly and tired. Right now I'm having trouble thinking clearly. It's soooo annoying. I hope whatever funk I'm under goes away soon.


So I guess you're up to speed now. I'll try to be more timely with news, phone willing. And I'll try not to be too grumpy -- but no promises. Later, -- K