My GSD Club gives out awards for a variety of reasons. Invariably, we wait until the last minute to place the order. (You'd think we'd learn.) We found a company that will customize various items -- plaques, metal, wood and even trophies -- quickly and for a reasonable price. Their customer service department will calmly walk a frustrated woman through the process -- again -- when she (ok, *I*) can't figure out the online order form. Below is a sampling of some of the things we've gotten done. 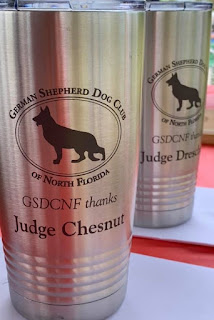 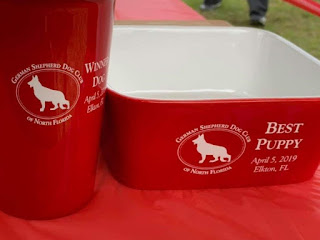 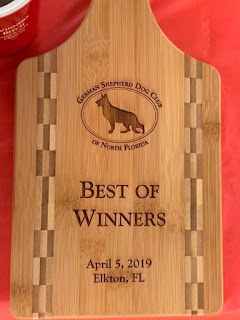 I don't make it a habit to give away free advertising. However, I am extremely impressed with the service we've received from K2 Awards. If you're looking for club award ideas, I hope this helps.

As I post this, I'm headed out the door to set up for our Specialty Match this weekend. In my SUV are the personalized judges gifts that I ordered last week. They're beautiful. And nobody has to know that I waited until the last minute. See you around the ring, -- K

Trooper still goes to work with me several days a week. I don't trust him to be loose in the house all day, and I don't want to crate him for 10 hours straight. Sometimes when things are slow I take silly pictures. For example: 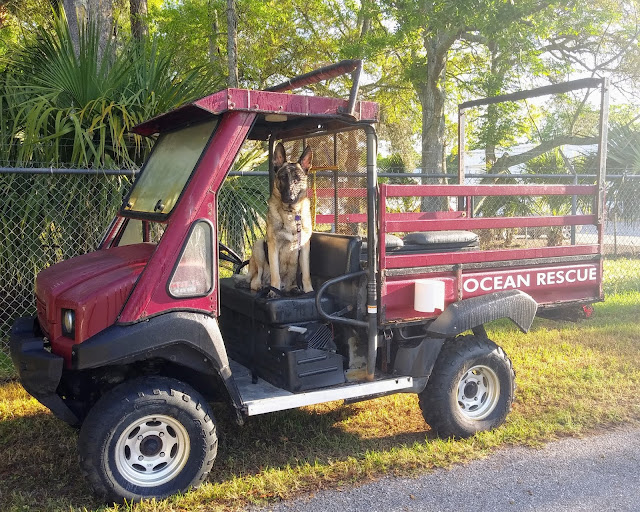 Hope it made you smile. Happy Wednesday! -- K

Like millions of other people, I am a Game of Thrones nut. I read the first book in 2003. I loved it and hated it at the same time. I may or may not have called my mother and told her she was an evil, horrible woman for sending me the book. Then I read the second book. And the third. (Do you see where I'm going with this?) The only reason we pay for HBO is because of the series.

After waiting nearly two years, I squealed with glee when the final season started last week. And I swore like a sailor when the episode was over. (54 minutes my ass!) So what does this have to do with Trooper?


I was at work and Hubby texted me pictures of the cable remote. Trooper had decided to use it as a chew toy. It was inoperable. (Hubby tried!) We had less than 12 hours before Game of Thrones. And it was Easter Sunday. Comcast was closed. Trooper was hiding in his crate because he knew I was coming home and going Cersei Lannister on his ass.﻿﻿﻿﻿﻿﻿


I posted pictures on the internet. Most of my friends laughed at my pain. Others suggested "the app" or running HBO Go through the PlayStation. Meanwhile, Hubby called customer service. The woman at Comcast helped him load an app onto his phone so it could be used as a remote for the TV. We were able to watch Game of Thrones, and Trooper lives another day.

At 14 months, I thought Trooper was past the destruction phase. Grrr. His teenage hormones have short-circuited his brain. He seems to have forgotten how to sit and down on command, and he thinks that wait is optional. I'm at my wits end. Manners class can't start soon enough! I'll keep you posted (on Trooper; you'll have to watch Game of Thrones for yourself). -- K


P.S. I went to Comcast after work on Monday, mangled remote in hand. They enjoyed the story and handed me a new one -- no questions asked.

Email ThisBlogThis!Share to TwitterShare to FacebookShare to Pinterest
Labels: Musing

Every year the non-profit group Friends of Clay County Animals holds a doggie Easter Egg Hunt to raise money for shelter animals. It's a lot of fun. Several GSD club members participate every year then head out to a dog-friendly restaurant. It's good socialization for dogs and people alike.

This was Trooper's first year going. We were in a park at one of the busiest intersections in town. There were hundreds of people, each with at least one dog. And the DJ this year was extra loud. Despite all the commotion, Trooper did great!

The rules are simple. If a dog touches an egg with his nose, his human can pick it up. There were 1200 eggs "hidden" in the field. Each egg contained a dog treat. Between both dogs we probably found 50 eggs. We even found one stuffed with a slip of paper redeemable for a special bag of treats. The boys made out this year.

While at the event we waited in line for the obligatory Easter Bunny photo (above). The dogs couldn't have cared less and the photo was way too dark. We'll just call it a donation to a good cause. At least the boys didn't try to eat him. I think Hubby told them we're having ham for Easter.

Hope you and yours have a happy Easter. TTFN, -- K

Email ThisBlogThis!Share to TwitterShare to FacebookShare to Pinterest
Labels: Things to Do

30 Years, 47 Dead and One Personal Miracle

Kelley's Dog Blog is stepping away from the dogs today. Please bear with me. You see, 30 years ago today something horrible happened -- and I missed it. A random decision made by someone I never met changed the course of my life. At the time I was annoyed, but now I'm eternally grateful. Here's the story of my personal miracle.

In late 1988 I was in the US Navy. I was on the fast track in the male-dominated field of weapons technology. In December of that year my naval career was derailed by a surprise pregnancy. At the same time my new husband (also a sailor) was offered his dream job: Turret Two, Center Gun, Gun Captain on the USS Iowa. The Navy was not friendly to dual-military families in the 80s so we had a hard decision to make: one of us had to quit to raise that baby.

﻿In January of 1989 I (begrudgingly) returned to civilian life and started packing up our household to make the move from Mayport, Florida to Norfolk, Virginia. At the last minute my husband received a call from a Senior Chief Reginald Ziegler. The senior chief wanted Hubby to attend a school in San Diego, California for three months before reporting to the Iowa. This required us to put all our stuff in storage and drive across the country (and back) in an '89 Camaro as my belly grew larger and larger. Hubby was to join the ship in June, a week before it left port for a 6-month Mediterranean cruise. This new plan left me to find a place to live and unpack, alone and eight months pregnant. Yeah, I grumbled. In fact, I bitched at all the way to California.


But then tragedy struck. On April 19, 1989, there was an explosion on the USS Iowa inside the center gun of turret two. 47 people died, including Senior Chief Ziegler and the gun captain. Had it not been for that last minute change I would've been a 20-year-old unemployed, pregnant widow. I know, wow.

The story doesn't end there! When the Iowa pulled back into Norfolk in December of 1989 families of the 47 victims visited the ship and laid a wreath upon the turret. Iowa sailors then gave tours to various family members. Can you guess who Hubby was assigned to escort? Mrs. Ziegler. (I couldn't make this up if I tried!) She shared that she was suffering from some serious health issues and was having a hard time with her husband's death. Hubby shared the story of how her husband's arbitrary decision saved his life, and then showed her a picture of our newborn son -- one he would've never met had it not been for her husband. They both cried.

Several weeks later, Hubby was assigned to discreetly remove and dispose of the wreath. He did, but not before pocketing one of the iridescent plastic stars. It's chipped and it's ugly, yet I hang it on my Christmas tree every year in memory of the Iowa 47.

On this day every year I say a prayer for the families, with an extra one for Mrs. Ziegler. The accident was pre-internet. I have no idea where she is or what became of her. If I did, I would tell her how sorry I am for her loss and how grateful I am for her husband. I would tell her that Hubby and I have been happily married for over 30 years and have two grown children. Her husband saved me from the unimaginable grief she had to go through. My family is forever indebted to her husband. I feel so blessed. And at the same time I feel so guilty. I hope that Mrs. Ziegler eventually found peace and happiness.

I rarely tell this story because I can't share it without sobbing uncontrollably. Fortunately, I can cry and type at the same time. Thank you for reading this to the end. Please say a prayer for the families of the Iowa 47. I know it's been three decades since the accident, but I doubt that the pain of their losses will ever completely go away. And say an extra prayer for the family of Senior Chief Ziegler.

Email ThisBlogThis!Share to TwitterShare to FacebookShare to Pinterest
Labels: Nostalgia

OMG. It's April! Where did the time go?

This is always a busy month for me.

Good news: I'm done with my Pity Party. The dogs and I are going to spend the next few months working on the basics. Along with Jedi's scent work classes, Trooper is starting a manners class next month with a favorite trainer of mine. And I'm blogging again. Yay! (It's always easier when I have something worth sharing.) I've got half a dozen future posts sketched out. And I've got a special, very personal post ready to go for tomorrow, so I hope you come back. Later, -- K

Our 2019 Specialty Shows are over. Trooper was among two dozen beautiful German shepherds vying to be judged Best of Breed. SPOILER: Trooper wasn't that dog. But he did look good. See:


Trooper was handled by co-owner PG, and the photos were taken by co-owner J-Lyn with J-Lyn Photography. My job was to pray that he wouldn't do anything stupid.

Trooper started limping during his last pass around the ring in the morning show. I don't know why. Did he step wrong? Could he have pano? (He's in that age range.) Whatever the cause, I pulled him from the afternoon show. I didn't want to exacerbate anything. Plus, Trooper was entered in two more shows that weekend. I gave him rest and Rimadyl. J-Lyn and I re-evaluated his gait each morning. Fortunately, he seemed okay. He took Reserve Winners Dog both days. Basically, that's first runner-up. Not great -- and worth zero points -- but we'll take it!


Trooper is going to take a break from the show ring. He needs time to mature. He has his big-boy body, but still has a little-boy brain. He needs to gain some confidence and learn self-control. We'll reassess in the fall. In the meantime, I've signed him up for a Manners class, with hopes of working toward Canine Good Citizen and Trick Dog titles. Hopefully we'll have plenty to share. Later, -- K