Things have been a bit wonky at work. Animal Control was kicked out of the police department four years ago because my office space was needed for yet another commander (yes, our department is top heavy). I was given an office in City Hall. It was nice, but there were a lot of stifling rules including no noise, no animals and no personal items.

Two years later I was kicked out of City Hall because the new mayor wanted my office (which he used less than three days a month). I was given part of a storage closet sized room in one of the community centers to store my computer and file boxes. I couldn't be in the building when it was rented out for parties or on Sundays during AA meetings. Other times I had to rearrange the room just to get to my makeshift desk. And like before, I was told no noise, no animals and no personalization. Also, no phone. 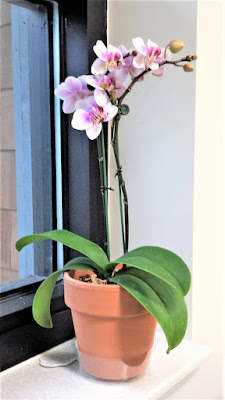 Eighteen months ago the police building was closed for renovation and our staff was working out of three separate locations. I pretty much worked out of my truck. Good news! The new building is complete and we're back in. I have a huge office with everything I need to work -- files, computer, printer, phone and my boss down the hall. My office also has plenty of storage. The closet is bigger than the space I had to share at the community center!

I got the OK to put a crate in the office for temporary animal holding and was told to personalize. Woohoo! Along with a radio, framed pictures and a mini fridge, I brought in a 2-gallon fish tank and an orchid because I like to surround myself with living things (except maybe for people). I finally have a happy work space! Sure, the job can still be stressful. Cases like last week will still happen, but now it's easier to take a few minutes to relax throughout the day. How about you? Where do you relax while at work?

It's Awww...Monday, where a group of bloggers come together to brighten the start of your work week. Click around below and see what others are sharing. Thank you Sandee for putting this together each week. Happy Monday! -- K

Email ThisBlogThis!Share to TwitterShare to FacebookShare to Pinterest
Labels: Awww...Monday