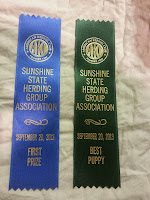 Jedi and I competed in our first dog shows this weekend. WOW. Not only did I meet my goal of not throwing up in the ring, we also won first place for the 9-12 month German shepherd dogs and Best Puppy on Friday! The judge, Nan Bodine, was very nice too. When we had our picture taken she said "You have a very typey dog, and when you pull it all together you'll do well." I thought that was a kind thing to say to a newbie. Later I had a professional handler ask if he could give me a few tips. Uh, Yeah! He showed me how to get a longer stride to better show Jedi's gait and an easier way to stack my dog. I'm trying to remember it all. I do know that I need to walk/jog more! 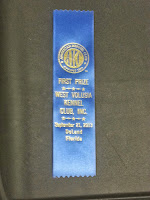 Saturday was a bigger show and not nearly as well organized. Still, we got first place again (it helped that nobody else was in the class this time). Jedi was tired so we packed up early. Hubby too. I would have liked to stick around to see more, but I wanted to leave on a good note so that Jedi (and Hubby!) will think of dog shows as fun.

Lessons learned for this experience:
We're going to try it again next weekend in Ocala. I've been told that those rings are outdoors and bigger. I'm praying for clear and cooler weather. And will try even harder not to throw up. I'll keep you posted. -- K
Posted by It's Kelley! at 2:50 PM