The Show is Over 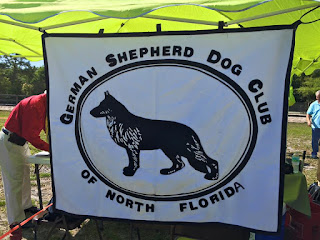 Last weekend the German Shepherd Dog Club of North Florida held our annual shows. There were a lot of changes this year.
Our show weekend went very well, but I'm glad it's over. It was exhausting. The weather was beautiful, albeit a little warmer than I had wanted. (Mid-80's. In April. Can you believe it?!)

I didn't take a single picture, despite the fact that my camera was in the car. Lucky for me, a few of our members are real shutterbugs. I stole these pictures from our club's FB page.


Sorry you missed the shows. They were great. They'll be even better next year when we host the 2017 Southeast Futurity/Maturity shows in addition to our regular shows. That's kind of a big deal, BTW. But for the next couple months we're going to rest and regroup.

I, however, can't rest just yet. This Saturday is our annual Beach Day BBQ. It's the favorite event of the year for many of our club members. And it takes more work to put on than many realize as well. Fortunately, I've planned this before. (Next year I'm delegating!) Back-to-back weekends may not have been the best idea. I'm too tired to make German Shepherd Cupcakes this year.

Anyway, I need to cut this short and load up the SUV. I'll share Beach Day with you later. I'll even try to remember to take pictures. TTFN, -- K
Posted by It's Kelley! at 6:25 PM