Jedi and I went to Ocala for our UKC Nose Work Pre-Trial tests on Saturday. We signed up to take the novice pre-trial (birch) and the advance pre-trial (anise) in the morning. The goal was to pass them both first thing and then head back to Jacksonville. However, the trials were set up so that we could retake them in the afternoon if we failed (for additional fees, of course).

It was raining Saturday morning. We had the option of staging inside the building instead of crating in our car as was originally planned. However, the facility was humid and noisy so I kept Jedi in the car for most of the morning. Jedi stayed dry, but I got nice and wet walking back and forth (hence my drowned rat look in the pictures). To make things worse, we were the last team up.

Birch was first. We were called into the testing area and given the instructions. There were 10 identical boxes in a long row. Only one contained the target odor. We had three minutes to find it and the timer started as soon as we crossed the start line. I held Jedi at the line for a good 30 seconds in hopes that he would catch a whiff. I talked softly to him, trying to pump him up. Then I gave the command: "Jedi, go find." Jedi didn't even try. He barely sniffed the boxes. I couldn't get him to focus. I walked him from the start line to the end, turned around and came back. He didn't indicate on anything. He was obviously uncomfortable. So then I started pointing and asking "Is it here? Is it here?" This usually helps to refocus him. When I pointed to the first box he looked at me and laid down. That's his signal. I called "Alert" and was told no. Jedi lied to me! I was disappointed but tried not to show it. I told him he was a good boy and left the testing area. I took him back to the practice boxes and had him indicate there. (Practice boxes are marked, so I knew which one had the odor.) When he got it right I gave his treat and praised him. I want this to be a fun and positive activity for him.

In hindsight, Jedi probably laid down at the first box just to get the whole thing over with. I don't know if he was nervous or picking up on my nerves. Either way, that wasn't the result we were looking for.


45 minutes later we were called up to search for anise. Jedi's focus wasn't any better. Like the previous time, he went up and back without any indication. So again, I started pointing. And again, he laid down at the first box. WTH Jedi?! This time I didn't believe him. I looked him in the eye and said "Jedi, go find." He sighed and got up, walked to box 8 and laid down. I called "Alert." We found it this time. YEA! Jedi got his treat (sausage!) and lots of praise. 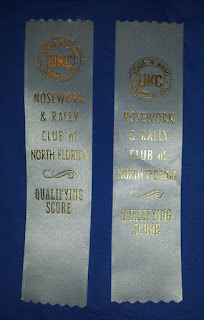 We had about three hours until the next pre-trial. In the interim we went for a drive. I got coffee at Dunkin Donuts and bought Jedi a breakfast sandwich at McDonalds. We found a Petco and walked around to clear our heads. By the time we got back to the testing site we were both more relaxed.

We searched for birch a second time. Jedi was a little more focused, but not as much as I would have liked. Again, I walked him up the boxes and back. He sniffed each and every one (this is called cataloging) and then laid down at the first box. I took a deep breath. The voices in my head were arguing back and forth. What if he's lying again? What if he's not? Do I risk breaking his trust? I asked him "Really, Dude?" He looked at me as if to say "Yes, really this time." I called "Alert," hoping I made the right call. The judge smiled at me and said "Correct." Jedi wasn't bluffing! Once my heart stopped pounding I accepted our ribbon with pride. It was a long, happy ride home. How's that for an Awww...?

It's Awww...Monday, where a group of bloggers try to get you to start your week with a smile. Did Jedi's victory do the trick? I hope so. Whether it did or not, make sure click around below and see what others are sharing today. -- K