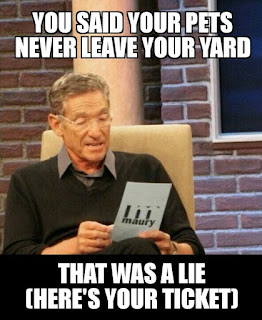 Back in 2014 I told you about a Dumb Ass Dog Owner who was proud of the fact that his two Australian shepherds had never been on a leash. What a douche. This same guy lets his dogs run at large on a regular basis. His neighbors complain about him -- by name! Public Works employees have had run ins with the dogs while trying to do their job. And police officers send me reports about these dogs running loose all the time.

In the past two years I've given this dog owner multiple verbal warnings, a written warning and three citations. (BTW, I write all this down.) Even New Guy knows this dog owner by name.

I had another encounter with King of the Douche Bags last week. I was on regular patrol and guess what I saw? Two Australian shepherds running in the middle of the road. When I pulled up KODB was his usual self. He was so nasty that I had police officers respond to the scene. He threatened to contest the ticket, call the mayor and to have me fired.

Then His Majesty decided to flame me on Facebook. I don't follow the City page on FB (it's too much drama for me). However, my friend sent me a link and said "You've gotta see this!" KODB posted my picture from the City webpage (what an ugly photo, ick) with the following:


Some people take their job way to seriously. Have you experienced this as well with this animal control officer? 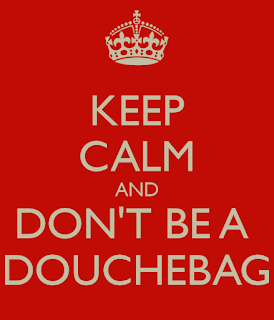 Surprisingly, the 20+ responses said basically one of two things. It was a variation of either
I was stunned. I checked the post periodically. The responses continued in the same vein. KODB started getting defensive and the thread got ugly. One guy told King "Know your audience, man" which had me cracking up. Another woman told him "This is so cowardly. She has a tough job. Leave her alone!!!"

The coup de gras came from Mama Bear herself. The Chief of Police stepped in and told him that any attempt to humiliate or shame a City employee is not appreciated. If he has a complaint with one of her officers he should call her directly.

Mysteriously, the entire thread disappeared about an hour later. I don't know if KODB had enough abuse and deleted it himself or if Mama Bear had the City Page's Admin do it. Either way, Chief has not called me in to discuss the matter. I don't think she knows I read the thread (or that my friend screenshotted the whole thing in case I end up in court with this guy).

So . . . that was how my week started. It went downhill from there. That's why yesterday's snuggle time was so appreciated. I'll share again later. But for now, I need more canine cuddle therapy. TTFN -- K