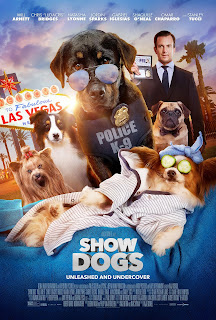 WARNING: Talking about Hollywood usually turns into a rant. How can an industry with so many resources get things so incredibly wrong? And why do we continue to support garbage?

I saw Show Dogs available at Redbox and was curious. There was a lot of controversy tied to the movie when it came out.

The AKC released a statement stating that:


The movie is not an accurate depiction of our sport or its participants . . . Additionally, the movie and its website improperly and inaccurately messages to audiences that the breeds depicted in the movie can be easily found in local animal shelters as a push to encourage adoption.

Too bad. This would have been a great opportunity to discuss things like purposeful breeding, breed standards and responsible breeders versus backyard breeders.

At the same time, parent groups were claiming that multiple scenes from the movie were grooming children for sexual abuse. What?! Complaints were over scenes that comically depicted the physical inspection of a male dog. (The scenes have since been deleted. Click here to see them for yourself.) Says USA Today:


Although this is standard at a dog show, parents' problem was with the way Max was told to deal with the uncomfortable handling.

After reading this I had to see the movie. Was it really as bad as critics claimed? I watched this movie with pen an paper in hand so I could share the good stuff (bad stuff?) with you.

The Plot: Max, a Rottweiler working for the NYPD, teams up with FBI Agent Nichols to stop an animal smuggling operation. To do so, Max goes undercover as a show dog in Las Vegas. Snide and condescending remarks are made about dog shows and all who participate in them. In the end, Max gains a new respect for show dogs. Think Miss Congeniality meets Air Bud.

Within the first four minutes I noticed two things about the Rottweiler that ruin the story right from the start:
The movie touched on owner versus handler (albeit poorly and prejudicially). It also explained that there are "three rounds" (though that's not what they're actually called): Best of Breed → Best of Group → Best in Show. The writers, however, don't seem to understand the seven AKC Groups. When it came to the Best in Show scene, there were two dogs representing the toy group and no dog from the sporting group. Seriously? They couldn't find a retriever or spaniel anywhere? Also, the Herding Group consisted of three Australian shepherds and a border collie -- never mind the other 28 breeds in the group.

Sadly, the scene where the agent dares the smuggler to shoot him was very true. Nichols says "The justice system rarely does anything to people who harm animals; but shoot a Fed and you're gonna get what you deserve." I shared my feelings about this topic in earlier posts.

Honestly, most of what the writers/producers got wrong could have been fixed with an hour of fact checking via Google and YouTube. These include:
Finally, animal control officers -- my peeps! -- are portrayed as heartless, inept buffoons. Yet again. 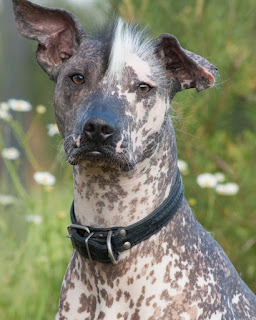 Funny aside: There's a weird guy with an ugly made-up designer dog. He approached Agent Nichols and wanted to breed his dog with Max. (I guess weird guy didn't notice that Max was neutered.) When Nichols said no, weird guy and dog both turned around and walked off in a huff -- revealing that the dog was actually an intact male! Be honest, am I the only one who notices dog balls? BTW, the "designer dog" was actually a purebred Xoloitzcuintli.

My honest opinion: The plot is banal and the humor crass. This movie is a 90 minute time suck. However, Show Dogs is no worse than most of the crap that Hollywood is producing for children these days. If you must watch a movie with a talking animal, I suggest Babe. -- K